Junior falconers come to the fore at the Fazza Championships

An impressive turnout from the UAE falconers of tomorrow were warmly welcomed by the organisers of this popular and prominent event in the Fazza Championships, which aims to maintain historically significant pastimes and pursuits associated with the UAE’s heritage and its people.

Souad Ibrahim Darwish, Director of Tournaments, Hamdan bin Mohammed Heritage Center said,”It’s a pleasure to see Emirati youth engaged in serious challenges, and show very high skills in a manner that impressed members of the jury, and the extent of their knowledge of this sport. This makes us feel very proud, especially since this is a main mission we have at HHC, namely the establishment of a strong link between Emirati youth and our traditional sports, and allowing them to spend their leisure time in entertaining activities while enhancing their association with the national identity of the UAE. It is certain that these types of tournaments will help us raise awareness about one of the most important UAE heritage sports amongst all facets of the society.”

Omar Al Maktoum, 12, who flew his falcon in tandem with his younger brother Abdullah (nine), commented: “When I was just six years old, I went with my father to hunt (with falcons). The more I went with him the more I enjoyed it and today it’s a great feeling to be here to compete with my falcons.”

“We are focused on preserving our culture at HHC and falconry is part of our heritage here,” said Mohammed Abdullah bin Dalmook, Director of Corporate Support at Hamdan Bin Mohammed Heritage Center. “We want to increase the number of participants that raise, train and race falcons. In 2015, we had 120 falcons participating, whereas we have over 400 this year. It is amazing to see the juniors here and we are really happy that they are enjoying themselves. They undertook the serious part, but – once they released their falcons – they ran around and they were cheering and enjoying themselves. However, there is also a serious element to it. There is high level of competition here and it is not a case that they release the falcons and do not care about the result because they really do.”

Nine-year-old Marwan Ali Al Murikhy stated: “I enjoy the sport and the fact that we can race against each other. My dad Ali and uncle Eissa first taught me to be a falconer and today I get the chance to show them what I’ve learnt.”

Saif Ibrahim Al Ghafli, 14, added: “My dad and grandfather passed falconry down to me and my five-year-old brother Eissa. I’ve been doing it for eight years now and it’s a hobby I really enjoy.”

Nawaf Al Matrooshi, whose 11-year-old son Rashid competed in yesterday’s event, said: “I’m very happy to see my son follow in my footsteps. We have to let them love the tradition, so that they get used to it and it stays with them and hopefully one day they pass it onto their children. My father introduced falconry to me when I was five years old and it’s in the blood.”

GCC nationals will also be competing across those four divisions over the next two days. The Fazza Championship for Falconry continues up until January 12, with competitors competing in a number of different disciplines, including live prey and tether-free flying. 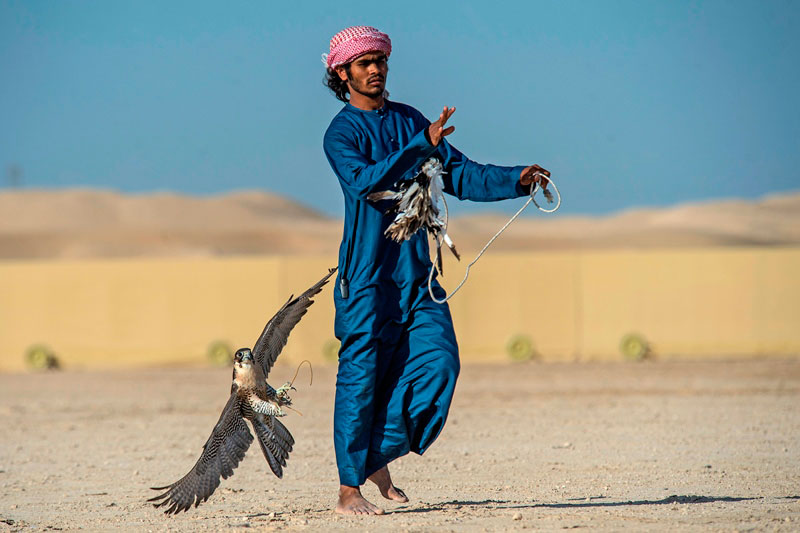